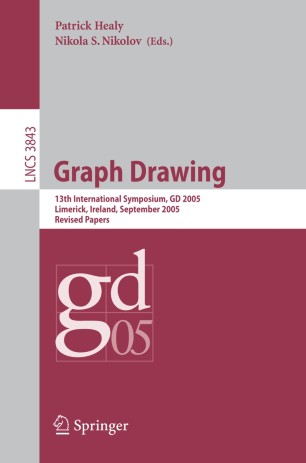 The 13th International Symposium on Graph Drawing (GD 2005) was held in Limerick, Ireland, September 12-14, 2005. One hundred and ?fteen participants from 19 countries attended GD 2005. In response to the call for papers the Program Committee received 101 subm- sions, each detailing original research or a system demonstration. Each submission was reviewed by at least three Program Committee members; each referee’s c- ments were returned to the authors. Following extensive discussions, the comm- tee accepted 38 long papers, 3 short papers and 3 long system demos, each of which were presented during one of the conference’s 12 sessions. Eight posters were also accepted and were on display throughout the conference. Two invited speakers, Kurt Mehlhorn and George Robertson, gave fascinating talks during the conference. Prof. Mehlhorn spoke on the use of minimum cycle bases for reconstructing surfaces, while Dr. Robertson gave a perspective, past and present, on the visualization of hierarchies. As is now traditional, a graph drawing contest was held during the conference. The accompanying report, written by Stephen Kobourov, details this year’s c- test. This year a day-long workshop, organized by Seok-Hee Hong and Dorothea Wagner, was held in conjunction with the conference. A report on the “Workshop on Network Analysis and Visualization,” written by Seok-Hee Hong, is included in the proceedings.