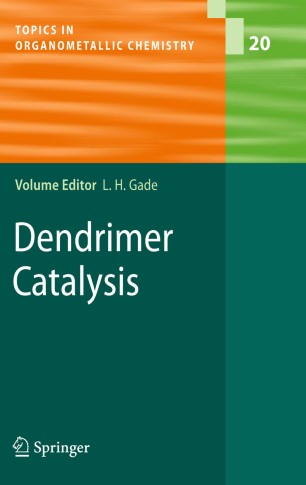 Since the first application of dendrimers in catalysis in the mid 1990s, this field has advanced rapidly. As a consequence, catalytically active dendrimers have emerged as a class of molecular catalysts that has substantially enriched the field of homogeneous (and in part heterogeneous) catalysis. A general survey of transition metal dendrimer catalysts and the way they have developed is followed by in-depth discussions of dendritic transition metal catalysis based on non-covalent catalyst-support interaction and an overview of the rapidly growing field of stereoselective dendrimer catalysis. The development of dendrimer-encapsulated bimetallic nanoparticles has provided the interface with heterogeneous colloid catalysis. As cheaper and readily accessible alternatives to regular dendrimers, hyperbranched polymers are increasingly being used as catalyst platforms. These topics are complemented by a review of metallodendritic exoreptors for the redox recognition of oxo-anions and halides.