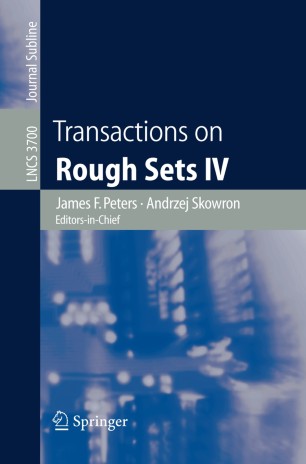 Volume IV of the Transactions on Rough Sets (TRS) introduces a number of new advances in the theory and application of rough sets. Rough sets and - proximationspaceswereintroducedmorethan30yearsagobyZdzis lawPawlak. These advances have profound implications in a number of research areas such as the foundations of rough sets, approximate reasoning, arti?cial intelligence, bioinformatics,computationalintelligence, cognitivescience, intelligentsystems, datamining,machineintelligence,andsecurity. Inaddition,itisevidentfromthe papers included in this volume that the foundations and applications of rough sets is a very active research area worldwide. A total of 16 researchers from 7 countries are represented in this volume, namely, Canada, India, Norway, S- den, Poland, Russia and the United States of America. Evidence of the vigor, breadth and depth of research in the theory and applications of rough sets can be found in the 10 articles in this volume. Prof. Pawlak has contributed a treatise on the philosophical underpinnings of rough sets. In this treatise, observations are made about the Cantor notion of a set, antinomies arising from Cantor sets, the problem of vagueness (es- cially, vague (imprecise) concepts), fuzzy sets, rough sets, fuzzy vs. rough sets as well as logic and rough sets. Among the many vistas and research directions suggested by Prof. Pawlak, one of the most fruitful concerns the model for a rough membership function, which was incarnated in many di?erent forms since its introduction by Pawlakand Skowronin 1994. Recall, here, that Prof.