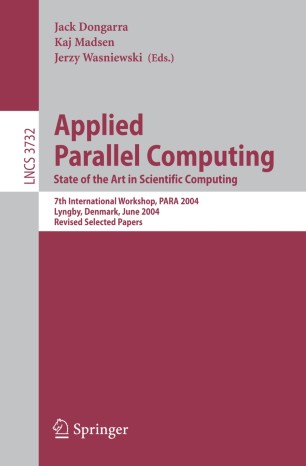 Applied Parallel Computing. State of the Art in Scientific Computing

Introduction The PARA workshops in the past were devoted to parallel computing methods in science and technology. There have been seven PARA meetings to date: PARA’94, PARA’95 and PARA’96 in Lyngby, Denmark, PARA’98 in Umea, ? Sweden, PARA 2000 in Bergen, N- way, PARA 2002 in Espoo, Finland, and PARA 2004 again in Lyngby, Denmark. The ?rst six meetings featured lectures in modern numerical algorithms, computer science, en- neering, and industrial applications, all in the context of scienti?c parallel computing. This meeting in the series, the PARA 2004 Workshop with the title “State of the Art in Scienti?c Computing”, was held in Lyngby, Denmark, June 20–23, 2004. The PARA 2004 Workshop was organized by Jack Dongarra from the University of Tennessee and Oak Ridge National Laboratory, and Kaj Madsen and Jerzy Was ´niewski from the Technical University of Denmark. The emphasis here was shifted to high-performance computing (HPC). The ongoing development of ever more advanced computers provides the potential for solving increasingly dif?cult computational problems. However, given the complexity of modern computer architectures, the task of realizing this potential needs careful attention. For example, the failure to exploit a computer’s memory hi- archy can degrade performance badly. A main concern of HPC is the development of software that optimizes the performance of a given computer. The high cost of state-of-the-art computers can be prohibitive for many workplaces, especially if there is only an occasional need for HPC.