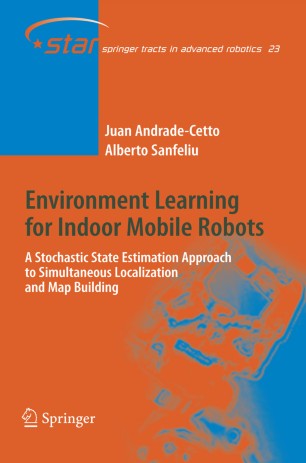 This monograph covers theoretical aspects of simultaneous localization and map building for mobile robots, such as estimation stability, nonlinear models for the propagation of uncertainties, temporal landmark compatibility, as well as issues pertaining the coupling of control and SLAM. One of the most relevant topics covered in this monograph is the theoretical formalism of partial observability in SLAM. The authors show that the typical approach to SLAM using a Kalman filter results in marginal filter stability, making the final reconstruction estimates dependant on the initial vehicle estimates. However, by anchoring the map to a fixed landmark in the scene, they are able to attain full observability in SLAM, with reduced covariance estimates. This result earned the first author the EURON Georges Giralt Best PhD Award in its fourth edition, and has prompted the SLAM community to think in new ways to approach the mapping problem. For example, by creating local maps anchored on a landmark, or on the robot initial estimate itself, and then using geometric relations to fuse local maps globally. This monograph is appropriate as a text for an introductory estimation-theoretic approach to the SLAM problem, and as a reference book for people who work in mobile robotics research in general.

Alberto Sanfeliu received the BSEE and PhD degrees from the Technical University of Catalonia in 1978 and 1982, respectively. He joined the UPC faculty in 1981, and is since 1984, Professor with the Systems Engineering Department, for which he was appointed Head in 2005. Dr.

Sanfeliu is also affiliated to the Institut the Robòtica i Informàtica Industrial, CSIC-UPC. His current research areas are Pattern Recognition, Computer Vision, and Robotics. He is Fellow of IAPR.