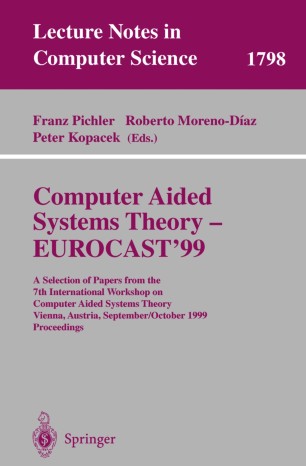 Computer Aided Systems Theory (CAST) deals with the task of contributing to the creation and implementation of tools for the support of usual CAD tools for design and simulation by formal mathematical or logical means in modeling. Naturally,thebasisfortheconstructionandimplementationofCASTsoftwareis provided by the existing current knowledge in modeling and by the experience of practitioners in engineering design. Systems Theory, as seen from the viewpoint of CAST research and CAST tool development, has the role of providing formal frameworks and related theoretical knowledge for model-construction and model analysis. We purposely do not distinguish sharply between systems theory and CAST and other similar ?elds of research and tool development such as for example in applied numerical analysis or other computational sciences. TheheredocumentedEUROCASTconferencewhichtookplaceattheVienna University of Technology re?ects current mainstreams in CAST. As in the p- vious conferences new topics, both theoretical and application oriented, have been addressed. The presented papers show that the ?eld is widespread and that new - velopments in computer science and in information technology are the driving forces. Theeditorswouldliketothanktheauthorsforprovidingtheirmanuscriptsin hardcopyandinelectronicformontime.Thesta?ofSpringer-VerlagHeidelberg gave, as in previous CAST publications, valuable support in editing this volume.