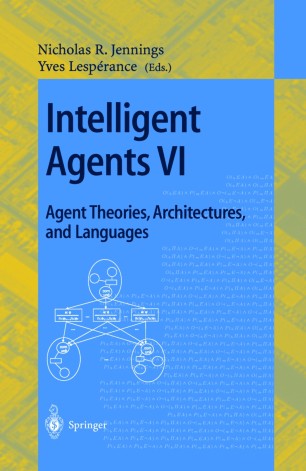 Intelligent agents are one of the most important developments in computer science in the 1990s. Agents are of interest in many important application areas, ranging from human-computer interaction to industrial process control. The ATAL workshop series aims to bring together researchers interested in the core aspects of agent technology. Speci?cally, ATAL addresses issues such as th- ries of agency, software architectures for intelligent agents, methodologies and programming languages for realizing agents, and software tools for developing and evaluating agent systems. One of the strengths of the ATAL workshop series is its emphasis on the synergies between theories, infrastructures, architectures, methodologies, formal methods, and languages. This year’s workshop continued the ATAL trend of attracting a large n- ber of high-quality submissions. In more detail, 75 papers were submitted to the ATAL-99 workshop, from 19 countries. After stringent reviewing, 22 papers wereacceptedforpresentationattheworkshop.Aftertheworkshop,thesepapers were revised on the basis of comments received both from the original reviewers and from discussions at the workshop itself. This volume contains these revised papers.