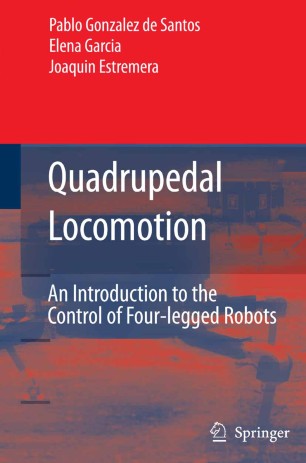 An Introduction to the Control of Four-legged Robots

Walking machines have advantages over traditional vehicles, and they have already succeeded in carrying out many tasks that wheeled or tracked robots cannot handle. Nevertheless, their use in industry and services is currently limited in scope. Quadrupedal Locomotion: An Introduction to the Control of Four-legged Robots brings together some of the methods and techniques in this emerging field that have recently been developed in an effort to deal with the problems that currently prevent legged robots being more widely used for real applications.

Quadrupedal Locomotion: An Introduction to the Control of Four-legged Robots illustrates the appropriate algorithms and methods through a discussion of simulation and experiments that have been tested on a real machine, the SILO4 walking robot. Data from the experiments can be found on-line at http://www.iai.csic.es/users/silo4/. This book is divided into two parts: the first part, Walking Measurements and Algorithms, introduces the historical development of quadrupeds, their advantages/disadvantages and potential uses, and the trade-off between quadrupeds and hexapods. The second part, Control Techniques, concentrates on general techniques that have been specifically applied to legged robots, including kinematic and dynamic models, soft computing techniques to increase speed, virtual sensors that help reduce the electronic burden of the machine, and software simulators to study and test certain robot properties.

As the first book to focus specifically on quadrupeds, Quadrupedal Locomotion: An Introduction to the Control of Four-legged Robots will be suitable for researchers, postgraduates and senior undergraduates in the field of robotics as well as engineers working in industry.