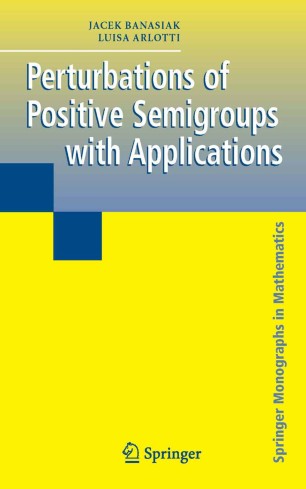 Perturbations of Positive Semigroups with Applications

Perturbations of Positive Semigroups with Applications is a self-contained introduction to semigroup theory with emphasis on positive semigroups on Banach lattices and perturbation techniques. The first part of the book, which should be regarded as an extended reference section, presents a survey of the results from functional analysis, the theory of positive operators and the theory of semigroups that are needed for the second, applied part of the book; worked examples are provided to help absorb the theoretical material. The second part then deals with the application of the developed theory to a variety of problems ranging from the classical birth-and-death type problems of population dynamics, through fragmentation models in both conservative and mass loss regimes, to kinetic models.

Features of particular interest include:

a survey of perturbation results for semigroups, beginning with the classical results and ending with more recent developments such as the Miyadera-Voigt perturbation theorem, Desch’s results and an extension of the Kato theorem to Kantorovic-Banach spaces;

comprehensive analysis of the relations between the generator of a semigroup and the conservativeness of this semigroup, providing applicable techniques for characterization of the generator;

a full description of the dynamics of birth-and-death problems;

an analytical explanation of shattering and dust formation and of the existence of multiple solutions for fragmentation equations;

a detailed analysis of the linear Boltzmann equation with external field with both classical and inelastic scattering kernels, supplemented by an exhaustive treatment of boundary value problems for a streaming operator;

applications to the asymptotic analysis of kinetic equations.

The only prerequisites are a basic knowledge of functional analysis and measure theory. This is an essential one-stop reference for graduate and postgraduate students and researchers in applied analysis and mathematical physics who are interested in the application of functional analytic techniques to concrete problems arising in physics, biology and engineering.