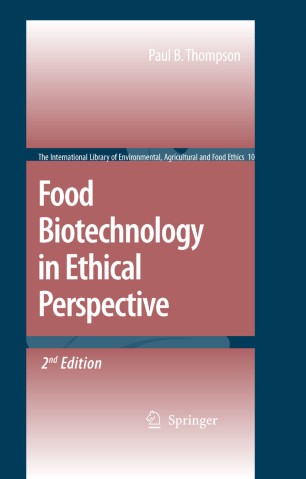 Part of the The International Library of Environmental, Agricultural and Food Ethics book series (LEAF, volume 10)

Agrifood biotechnology—the genetic transformation of plants and animals through recombinant means—has created controversy in the food system for more than twenty years. This thoroughly revised and amended edition of Paul B. Thompson’s path breaking study of ethical and philosophical issues raised by this technology up to date. The original 1997 edition was the first book length treatment by a philosopher to focus on food and agricultural biotechnology, covering ethical issues associated with risk assessment, labelling, animal transformation, patents, and the impact of biotechnology on traditional farming communities in both the developed and developing world. The new edition reflects lessons from the hotly contested debates over those issues in the intervening decade, and includes wholly new discussions on ethical issues associated with livestock cloning, the Precautionary Principle, and the transatlantic debate between United States and European perspectives on biotechnology. Thompson’s unique and insightful approach to addressing the risks and questions of public acceptability associated with novel technology stands as a model for anyone interested in technological innovation and social change. The book should be of interest to scholars and citizens interested in the Internet or nanotechnology, while it remains an essential resource for understanding the twists and turns of debate over the role of molecular genetics in the transformation of the global food system.