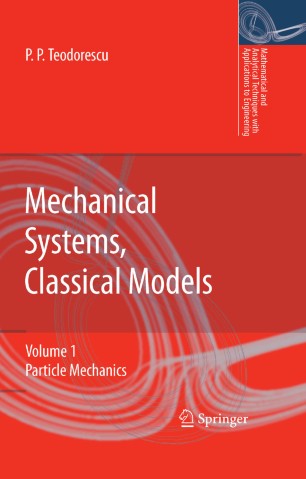 All phenomena in nature are characterized by motion; this is an essential property of matter, having infinitely many aspects. Motion can be mechanical, physical, chemical or biological, leading to various sciences of nature, mechanics being one of them. Mechanics deals with the objective laws of mechanical motion of bodies, the simplest form of motion.

In this respect, the guideline of the present book is precisely the mathematical model of mechanics. A special accent is put on the solving methodology as well as on the mathematical tools used; vectors, tensors and notions of field theory. Continuous and discontinuous phenomena, various mechanical magnitudes are presented in a unitary form by means of the theory of distributions. Some appendices give the book an autonomy with respect to other works, special previous mathematical knowledge being not necessary.

Some applications connected to important phenomena of nature are presented, and this also gives one the possibility to solve problems of interest from the technical, engineering point of view. In this form, the book becomes – we dare say – a unique outline of the literature in the field; the author wishes to present the most important aspects connected with the study of mechanical systems, mechanics being regarded as a science of nature, as well as its links to other sciences of nature. Implications in technical sciences are not neglected.

Audience:
Librarians, and researchers interested in the fundamentals of mechanics

"This book is the first volume of a treatise on the classical theory of mechanical systems. … The book is useful at the graduate level in physics and mechanical engineering, as well as in mathematics. … The mathematical aspects are carefully presented. The text provides a detailed analysis of some generic examples, which will be enough to show how the theory is applied, at least for experienced readers. The subjects covered by the text are divided into 10 large chapters." (José Fernández-Núñez, Mathematical Reviews, Issue 2008 j)