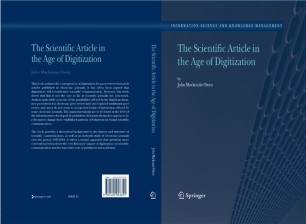 The Scientific Article in the Age of Digitization

1. The birth of the electronic journal In the autumn of 1987 Michael Ehringhaus and Bird Stasz of Syracuse U- versity launched New horizons in adult education, probably the very rst ref- 1 ereed scienti c journal to be published in electronic form ( g. 1. 1). The rst issue was sent over the Adult Education Network (AEDNET). The journal still 2 exists today. In March 1991 Ted Jennings of the University at Albany (State 3 University of New York) launched EJournal, described as an ‘electronic jo- nal concerned with the implications of electronic networks and texts’ ( g. 1. 2), coining the now popular term e-journal. The Online journal of current cli- cal trials, published from September 1991, has been described as the rst peer 45 reviewed electronic journal in medicine. How signi cant is the phenomenon of the scienti c electronic journaltoday, more than a decade and a half after its introduction? Over this period inf- mation and communication technologies (ICT) have been an important factor in the development of scienti c communication. Applications such as c- munication over digital networks (converging towards a single network – the Internet), the use of computerized systems for creating, storing and retrieving 1 The scienti c journal is also referred to as ‘scholarly’ or ‘research’ journal. We use the former term in this study. 2 Although no longer distributed over AEDNET but through the World Wide Web. The rst issue is now ? available at http://www. nova. edu/ aed/horizons/vol1n1.