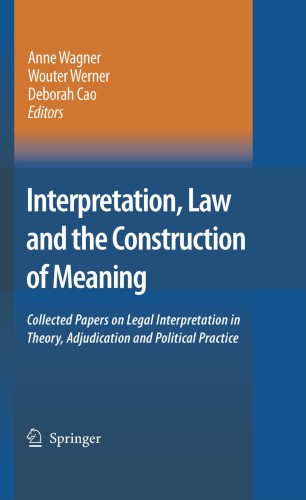 Interpretation, Law and the Construction of Meaning

Legal semiotics emphasizes the contingency and fluidity of legal concepts and stresses the existence of overlapping, competing and coexisting legal discourses. In response to new problems, changing power structures, changing societal norms and new faces of injustice established doctrines are reconsidered, reformulated and partly replaced by competing doctrines and hypotheses. Given the relative indeterminacy of law, it is no surprise that the problem of interpretation has always been one of the focal points of attention for legal semiotics. Who has the power to define words and concepts? Who can successfully assume the power to speak on behalf of the legal community? Which methods are used to justify the power to define?

This book discusses the questions mentioned above from three, related perspectives:

"Combining theoretical inspiration with a keen interest in case law, this volume will appeal to scholars and students of legal theory, jurisprudence, legal anthropology, postcolonial studies, indeed to anyone who’s interested in problems of interpretation in legal and political theory and practice. It should also come in very handy in the classroom."
Ronnie Lippens, Professor of Criminology, Keele University.