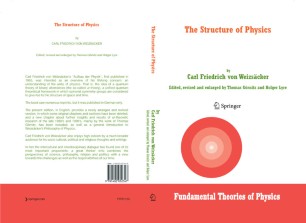 The Structure of Physics

Carl Friedrich von Weizsäcker‘s "Aufbau der Physik", first published in 1985, was intended as an overview of his lifelong concern: an understanding of the unity of physics. That is, the idea of a quantum theory of binary alternatives (the so-called ur-theory), a unified quantum theoretical framework in which spinorial symmetry groups are considered to give rise to the structure of space and time.

The book saw numerous reprints, but it was published in German only.

The present edition, in English, provides a newly arranged and revised version, in which some original chapters and sections have been deleted, and a new chapter about further insights and results of ur-theoretic research of the late 1980’s and 1990’s, mainly by the work of Thomas Görnitz, has been included, as well as a general introduction to Weizsäcker’s Philosophy of Physics.

Carl Friedrich von Weizsäcker also enjoys high esteem by a much broader audience for his socio-cultural, political and religious thoughts and writings.

In him the intercultural and interdisciplinary dialogue has found one of its most important proponents: a great thinker who combines the perspectives of science, philosophy, religion and politics with a view towards the challenges as well as the responsibilities of our time.