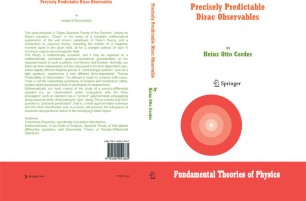 This work presents a "Clean Quantum Theory of the Electron", based on Dirac’s equation. "Clean" in the sense of a complete mathematical explanation of the well known paradoxes of Dirac’s theory, and a connection to classical theory, including the motion of a magnetic moment (spin) in the given field, all for a charged particle (of spin ½) moving in a given electromagnetic field.
This theory is relativistically covariant, and it may be regarded as a mathematically consistent quantum-mechanical generalization of the classical motion of such a particle, à la Newton and Einstein. Normally, our fields are time-independent, but also discussed is the time-dependent case, where slightly different features prevail. A "Schroedinger particle", such as a light quantum, experiences a very different (time-dependent) "Precise Predictablity of Observables". An attempt is made to compare both cases. There is not the Heisenberg uncertainty of location and momentum; rather, location alone possesses a built-in uncertainty of measurement.
Mathematically, our tools consist of the study of a pseudo-differential operator (i.e. an "observable") under conjugation with the Dirac propagator: such an operator has a "symbol" approximately propagating along classical orbits, while taking its "spin" along. This is correct only if the operator is "precisely predictable", that is, it must approximately commute with the Dirac Hamiltonian, and, in a sense, will preserve the subspaces of electronic and positronic states of the underlying Hilbert space.