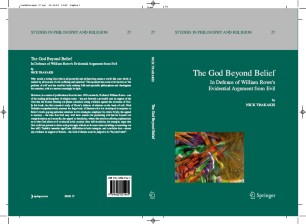 The God Beyond Belief

In Defence of William Rowe'S Evidential Argument from Evil

Part of the Studies in Philosophy and Religion book series (STPAR, volume 27)

Why would a loving God who is all-powerful and all-knowing create a world like ours which is marred by all manner of evil, suffering and injustice? This question has come to be known as ‘the problem of evil’ and has troubled both ordinary folk and specialist philosophers and theologians for centuries, with no answer seemingly in sight.

However, in a series of publications from the late 1970s onwards, Professor William Rowe – one of the leading philosophers of religion today – has put forward a powerful case in support of the view that the horrors littering our planet constitute strong evidence against the existence of God. In this book, the first extended study of Rowe’s defense of atheism on the basis of evil, Nick Trakakis comprehensively assesses the large body of literature that has developed in response to Rowe’s work, paying particular attention to two strategies employed by critics: firstly, the appeal to mystery – the idea that God may well have reasons for permitting evil that lie beyond our comprehension; and secondly, the appeal to theodicies, where this involves offering explanations as to why God allows evil to abound in his creation (free will theodicies, for example, argue that God could not prevent us from acting wrongly without at the same time curtailing or removing our free will). Trakakis unearths significant difficulties in both strategies, and concludes that – absent any evidence in support of theism – the God of theism must be judged to be "beyond belief".