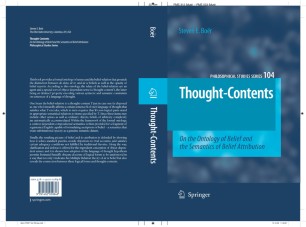 On the Ontology of Belief and the Semantics of Belief Attribution

This book provides a formal ontology of senses and the belief-relation that grounds the distinction between de dicto, de re, and de se beliefs as well as the opacity of belief reports. According to this ontology, the relata of the belief-relation are an agent and a special sort of object-dependent sense (a "thought-content"), the latter being an "abstract" property encoding various syntactic and semantic constraints on sentences of a language of thought.

One bears the belief-relation to a thought-content T just in case one (is disposed as one who) inwardly affirms a certain sentence S of one’s language of thought that satisfies what T encodes, which in turn requires that S’s non-logical parts stand in appropriate semantical relations to items specified by T. Since these items may include other senses as well as ordinary objects, beliefs of arbitrary complexity are automatically accommodated. Within the framework of the formal ontology, a context-dependent compositional semantics is then provided for a fragment of regimented English capable of formulating ascriptions of belief—a semantics that treats substitutional opacity as a genuine semantic datum.

Finally, the resulting picture of belief and its attribution is defended by showing how it solves standard puzzles, avoids objections to rival accounts, and satisfies certain adequacy conditions not fulfilled by traditional theories. Along the way, clarification and defense is offered for the ingredient conception of object-dependent senses, and it is shown how adoption of the language of thought hypothesis permits Bertrand Russell’s obscure doctrine of logical forms to be understood in a way that not only vindicates his Multiple Relation theory of de re belief but also reveals the connection between these logical forms and thought-contents.