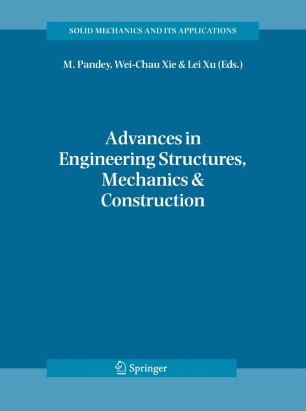 Part of the Solid Mechanics and Its Applications book series (SMIA, volume 140)

This volume is the proceedings of the International Conference on Advances in Engineering Structures,Mechanics& Construction,convenedat the UniversityofWaterloo on May14–17,2006. TheconferencewasheldtocelebratefortyyearsofrelatedresearchachievementattheUniversity of Waterloo. The Solid Mechanics Division (SMD) of the university was founded in 1966 as a research centre of excellence. During the next three decades, SMD hosted many scienti?c visitors from around the world and held more than a dozen international conferences, lecture series and symposia on a diverse range of topics in mechanics and structural engineering. Upon the retirement of many of its founding members in the 1990s, SMD was renamed the Structures, Mechanics & Construction Division (SMCD) to re?ect the changing research interests of its newer members. The conference also celebrated the academic career of Professor Donald E. Grierson as a dist- guished researcher and educator. Professor Grierson has been a faculty member of the Department of Civil Engineering and SMD/SMCD of the University of Waterloo since 1968. He was an early contributor to the Solid Mechanics Division in the 1960s, and was pivotal in the reformation of the Structures, Mechanics & Construction Division in the mid of 1990s. After a productive career of thirty-eight years in research and teaching, Professor Grierson retired from the university at the end of 2005.