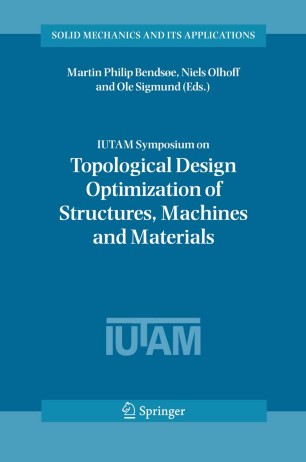 Part of the Solid Mechanics and Its Applications book series (SMIA, volume 137)

This book contains the refereed and edited versions of papers presented at the IUTAM Symposium on Topological Design Optimization of Structures, - chines and Materials: Status and Perspectives, held at Rungstedgaard, near Copenhagen, Denmark, October 26–29, 2005. The symposium was attended by 74 scientists from 19 countries, and the programme was intensive and - cluded also two evenings for presentations and discussions. It is now more than 15 years ago that the so-called homogenization method was proposed as a basis for computational means to optimize the topology and shape of continuum structures. From initially being capable mainly of treating minimum compliance design we now see the basic material distribution idea of the methodology applied to a wide range of structural and mechanical pr- lems as well as to problems that couple structural response to other physical responses. Also, the method has provided insight for micro-mechanical st- ies, meaning that the method has given feedback to the area which provided impetus to the ?eld of topological design optimization in its creation. Finally, topological design is now an integral part of most FEM software systems and it has become a standard industrial tool in some ?elds. The IUTAM Symposium provided a forum for the exchange of ideas for - ture developments in the area of topological design optimization. This enc- passed the application to ?uid-solid interaction problems, acoustics problems, and to problems in biomechanics, as well as to other multiphysics problems.