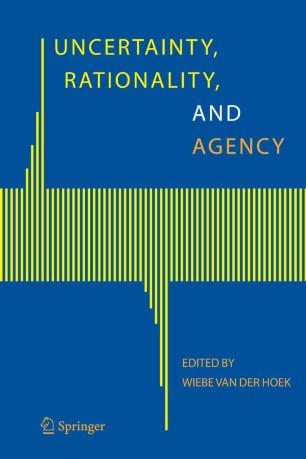 This book is about Rational Agents, which can be humans, players in a game, software programs or institutions. Typically, such agents are uncertain about the state of affairs or the state of other agents, and under this partial information they have to decide on which action to take next.

This book collects chapters that give formal accounts not only of Uncertainty, Rationality and Agency, but also of their interaction: what are rational criteria to accept certain beliefs, or to modify them; how can degrees of beliefs guide an agent in making decisions; why distinguish between practical and epistemic rationality when agents try to coordinate; what must be common beliefs between agents about each other's rationality in order to act rationally themselves; can an agent assign probabilities to planned actions; how to formalise assumptions about a rational speaker in a conversation obeying Gricean maxims; how should a rational agent best represent the states, consequences, and acts that constitute the agent's rational decision problem?

This volume should appeal to researchers addressing issues in artificial systems that have to gather information in order to obtain Knowledge, reason about it and then make a Rational decision about which Action to take next.