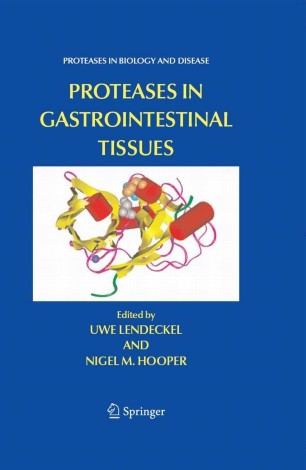 Part of the Proteases in Biology and Disease book series (PBAD, volume 5)

This, the fifth volume in the Proteases in Biology and Disease series, is devoted to Proteases in Gastrointestinal Tissues. Of course, proteases play an important role in the digestion and utilization of ingested proteins, but besides that they elicit a wide range of physiological and pathological effects. Proteases have been recognized as essential regulators, acting both locally and systemically, of normal development, growth and functioning. Dysregulation of protease expression and/or enzymatic activity is often associated with the onset or progression of disease and, thus, proteases represent interesting targets for the pharmacological therapy of e. g. cancer, chronic inflammation, graft rejection, fibrosis, diabetes, vascular disease, and viral or bacterial infections. In addition, changes in the localization, abundance or activity of proteases may serve as informative diagnostic or prognostic markers. This volume focuses on stomach, gut, pancreas, and liver and highlights the role of proteases in normal physiology and disease processes involving these tissues. The first chapter by Nigel W. Bunnett and Graeme S. Cottrell reviews the current knowledge about the protease-activated receptors (PARs) in gastrointestinal tissues. Starting with the mechanisms of activation, signal transduction, and regulation of PAR, their role in controlling gastrointestinal functions and the possible involvement in gastrointestinal diseases are summarized. In Chapter 2, Nikhil I. Khushalani and Nithya Ramnath review the role of matrix metalloproteases (MMPs) and their natural inhibitors, TIMPs, in different types of gastric cancer.