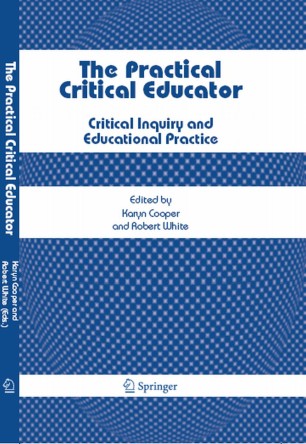 Critical pedagogy is a field of theory and practice which has the potential to inspire thoughtful, committed teachers to make real differences for their most vulnerable students and, by doing so, extending social justice far beyond their students and into the larger society.

This text is about being sensitive to, respecting and honouring differences among individuals and groups of individuals. The editors ask how one begins to connect the professional lives of educators with a Critical democratic practice for the pluralistic milieu of the twenty-first century. While the editors of this volume come from different educational disciplines - that is, literacy and educational administration - they share common philosophies, common educational practices and common educational goals premised upon a democratic Critical education. However different these vantage points may appear, they are both rooted in the desire for positive social change.

It is this critical component that continuously asks: Who benefits? In whose interests are changes being effected? What are the power differentials? Are there hidden agendas? Hidden curriculums? Null curriculums? The book aims to address these concerns, through lived experiences of those involved in creating positive change. Through an integrated framework of Critical literacy, Critical learning and Critical leadership, some of the more prevalent and pernicious problems of humanity can be identified, engaged and rectified. Through concrete examples, the editors promote the concept that every educator, including students, can become agents of change.

"Cooper and White’s inspiring and imposing collection brings together and publishes for the first time some of the best writers and writing from across the world in critical theory and critical pedagogical practice.... Karyn Cooper’s and Robert White’s book makes critical theory practical for any and all teachers who are authentically concerned about promoting social justice among their students and in their world. Modest, not messianic in personality, witty not weary in disposition, compassionate rather than cutting in their engagements with those around them, Cooper and White have produced a book that reflects their vision as professionals and their values as people. If you want to make a difference, and want to change the world, this is the book that will get you started and keep you going."