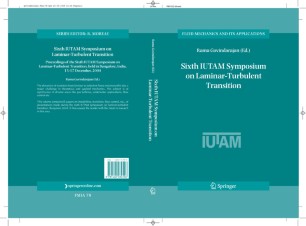 Part of the Fluid Mechanics and Its Applications book series (FMIA, volume 78)

The dynamics of transition from laminar to turbulent flow remains to this day a major challenge in theoretical and applied mechanics. A series of IUTAM symposia held over the last twenty five years at well-known Centres of research in the subject - Novosibirsk, Stuttgart, Toulouse, Sendai and Sedona (Arizona) - has proved to be a great catalyst which has given a boost to research and our understanding of the field. At this point of time, the field is changing significantly with several emerging directions. The sixth IUTAM meeting in the series, which was held at the Jawaharlal Nehru Centre for Advanced Scientific Research, Bangalore, India, focused on the progress after the fifth meeting held at Sedona in 1999. The s- posium, which adhered to the IUTAM format of a single session, included seven invited lectures, fifty oral presentations and eight posters. During the course of the symposium, the following became evident. The area of laminar-turbulent transition has progressed considerably since 1999. Better theoretical tools, for handling nonlinearities as well as transient behaviour are now available. This is accompanied by an en- mous increase in the level of sophistication of both experiments and direct numerical simulations. The result has been that our understanding of the early stages of the transition process is now on much firmer footing and we are now able to study many aspects of the later stages of the transition process.