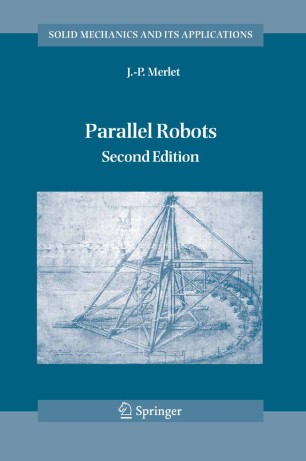 Part of the Solid Mechanics and Its Applications book series (SMIA, volume 128)

Parallel robots are closed-loop mechanisms presenting very good performances in terms of accuracy, velocity, rigidity and ability to manipulate large loads. They have been used in a large number of applications ranging from astronomy to flight simulators and are becoming increasingly popular in the field of machine-tool industry. This book presents a complete synthesis of the latest results on the possible mechanical architectures, analysis and synthesis of this type of mechanism. It is intended to be used by students (with over 150 exercises and numerous internet addresses), researchers (with over 650 references and anonymous ftp access to the code of some algorithms presented in this book) and engineers (for which practical results, mistakes to avoid, and applications are presented).

Since the publication of the first edition (2000) there has been an impressive increase in terms of study and use of this kind of structure that are reported in this book. This second edition has been completely overhauled. The initial chapter on kinematics has been split into Inverse Kinematics and Direct Kinematics. A new chapter on calibration was added. The other chapters have also been rewritten to a large extent. The reference section has been updated to include around 45% new works that appeared after the first edition.