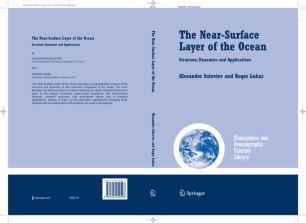 The Near-Surface Layer of the Ocean

The Near-Surface Layer of the Ocean provides a comprehensive account of the structure and dynamics of this important component of the ocean. The book develops the relevant physics and thermodynamics in depth. Detailed treatment is given to the surface microlayer, upper-ocean turbulence, fine thermohaline structure, coherent structures, high wind-speed regime, and to practical applications. Results of major air-sea interaction experiments (including those obtained with the participation of the authors) are used in the analysis.

Dr. Alexander Soloviev is an Associate Professor at the NOVA Southeastern University’s Oceanographic Center, Dania Beach, Florida. He also worked as a research scientist in the two leading research institutions of the former Soviet Academy of Sciences: P.P. Shirshov Institute of Oceanology and A.M. Oboukhov Institute of Atmospheric Physics.

Dr. Roger Lukas is a Professor in the Department of Oceanography at the University of Hawaii, in Honolulu, Hawaii. He was one of the two principal organizers of a major international air-sea interaction experiment (TOGA/COARE) conducted during 1992-94 in the western equatorial Pacific.