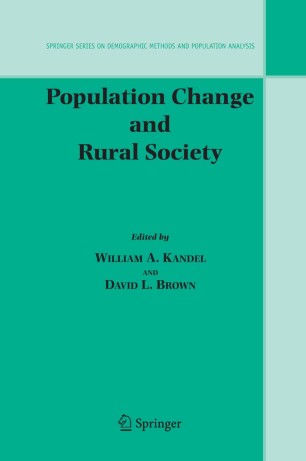 Part of the The Springer Series on Demographic Methods and Population Analysis book series (PSDE, volume 16)

CALVIN L. BEALE In considering how to introduce the subject of rural population change in st the 21 Century, I ?nd myself re?ecting on my own experience as a demographer for the U. S. Department of Agriculture. When I arrived at the Department, the post-World War II modernization of farming was well under way. Each year, my colleague Gladys Bowles and I had the unpopular task of announcing how much the farm population had decreased in the prior year. It was hard to say that the phenomenon was someone’s fault. Dramatic reductions in labor requirements per unit of agricultural output were occurring everywhere and not just in the United States. But politically, blame had to be assigned, and whichever political party was not in the White House was certain to place the blame squarely on the current administration. The demographic consequences of this trend were major. In a 22-year period from 1941 to 1962, the net loss of farm population from migration and cessation of farming averaged over a million people per year. It took eight years after the war before an administration was willing to begin to talk about the need to diversify rural employment. By that time, farm residents had already become a minority of rural people. However, well into the 1970s, I continued to receive inquiries from people who still equated rural with farm or who could not envision what rural-nonfarm people did for a living.