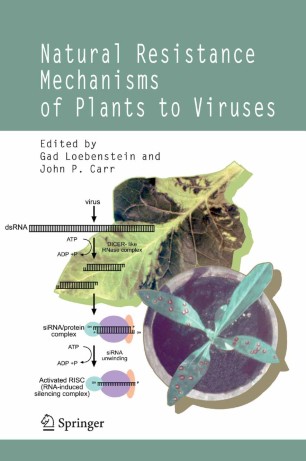 Over the course of evolution most plants have acquired the ability to defend themselves against most groups of pathogens, including the viruses. Many antiviral resistance phenomena have been known and studied for decades but, until recently, understanding of their underlying mechanisms has lagged behind. These phenomena include resistance to infection, resistance to virus translocation through the plant, recovery from infection and genetically defined resistance, together with the associated phenomena of the local lesion response, and induced, or acquired, resistance. The identification and cloning of plant resistance genes, characterization of downstream signaling components, and especially the explosion of data regarding gene-silencing mechanisms, has led to rapid progress in the investigation of natural resistance phenomena. Meanwhile, in plant virology there has been remarkable progress in the arenas of replication, movement proteins and plasmodesmatal gating, and in the discovery of gene silencing suppressors. Therefore, it seemed timely and appropriate to link older but still important data on the well known, ‘classical’ resistance phenomena with the new information that has emerged during the last decade or so. We hope that this book will inspire further research in this area, as resistance presents the most economical and environmentally sound approach to control plant virus diseases. Future technologies that emerge from this research might include an improved ability to introduce resistance genes into virus-susceptible, agronomically important cultivars, to improve current pathogen-derived resistance strategies using our new knowledge of small interfering and microRNAs, or to develop targeted chemical treatments.