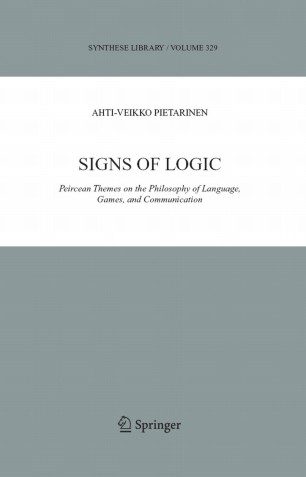 Peircean themes on the philosophy of language, games, and communication

Charles Sanders Peirce (1839-1914), the principal subject of this book, was one of the most profound and prolific thinkers and scientists to have come out of the United States. His pragmatic logic and scientific methodology largely represent the application of interactive and intercommunicative triadic processes, best viewed as strategic and dialogic conceptualisations of logical aspects of thought, reasoning and action. These viewpoints also involve pragmatic issues in communicating linguistic signs, and are unified in his diagrammatic logic of existential graphs. The various game-theoretic approaches to the semantics and pragmatics of signs and language, to the theory of communication, and to the evolutionary emergence of signs, provide a contemporary toolkit, the relevance of which Peirce envisioned to a wondrous extent.

This work sheds considerable new light on these and other aspects of Peirce’s philosophy and his pragmatic theory of meaning. Many of his most significant writings in this context reflect his later thinking, covering roughly the last 15-20 years of his life, and they are still unpublished. Drawing comprehensively from his unpublished manuscripts, the book offers a fresh and rich picture of this remarkable man’s original involvement with logical aspects of thought in action.