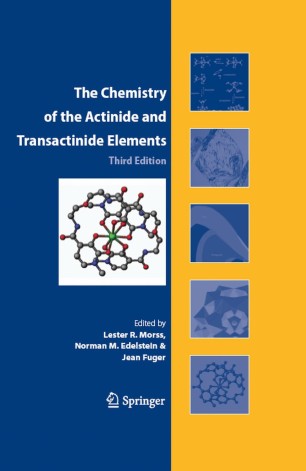 The ?rst edition of this work (The Chemistry of the Actinide Elements by J. J. Katz and G. T. Seaborg) was published in 1957, nearly a half century ago. Although the chemical properties of thorium and uranium had been studied for over a century, and those of actinium and protactinium for over ?fty years, all of the chemical properties of neptunium and heavier elements as well as a great deal of uranium chemistry had been discovered since 1940. In fact, the concept that these elements were members of an “actinide” series was ?rst enunciated in 1944. In this book of 500 pages the chemical properties of the ?rst transuranium elements (neptunium, plutonium, and americium) were described in great detail but the last two actinide elements (nobelium and lawrencium) remained to be discovered. It is not an exaggeration to say that The Chemistry of the Actinide Elements expounded a relatively new branch of chemistry. The second edition was published in 1986, by which time all of the actinide elements had been synthesized and chemically characterized, at least to some extent. At this time the chemistry of the actinide elements had reached maturity.

Lester R. Morss is the Program Manager for Heavy Element Chemistry at the Office of Science , U.S. Department of Energy in Germantown, Maryland, USA. He was taught actinide chemistry fbyProfessor Burris B. Cunningham, his Ph.D. mentor at the University of California, Berkeley and from 1971 to 1980 he was a member of the chemistry faculty at Rutgers University, New Brunswick, New Jersey, USA.  In 1980, Dr. Morss moved to the Argonne National Laboratory (Illinois, USA), where he remained as an actinide chemist until 2002 .  At all of these institutions he carried out research in the inorganic chemistry of lanthanide and actinide elements, with a focus on transuranium elements. His publications were primarily in thermochemistry and structure-bonding relationships among metals, oxides, halides, and coordination complexes. Dr. Morss has had fellowships at the University of Liege, Belgium and at the University of Hannover, Germany (von Humboldt Senior Scientist) and he is also a fellow of the American Association for the Advancement of Science.

Norman Edelstein is an emeritus Senior Scientist at the Lawrence Berkeley National Laboratory (LBNL). He started his studies in actinide chemistry with Professor Burris B. Cunningham in 1964 at LBNL (then the University of California Radiation Laboratory), USA.  Following Professor Cunningham’s untimely death in 1972 he became head of the actinide chemistry group and held that position until his assignment in 2000 and 2001 as temporary Program Manager for Heavy Element Chemistry at the Office of Science, U.S. Department of Energy, Germantown, Maryland, USA.  His primary research interests are the optical properties, magnetic properties, and electronic structure of the actinides and lanthanides; the general, inorganic and solution chemistry of the actinides; and synchrotron radiation studies of actinides and other environmentally relevant materials.  Dr. Edelstein has published over 200 papers on these and other topics and has edited three other volumes on actinide subjects.

Jean Fuger is Professor Emeritus at the University of Liège, Belgium, where he has taught courses in radiochemistry, analytical chemistry, and related subjects.  In the early stages of his career, whilst associated with the Inter-University Institute for Nuclear Sciences (Brussels, Belgium), he made extensive stays at the University of California Radiation Laboratory, Berkeley, USA, with Professor Burris B. Cunningham, from whom he learned various microchemical techniques in actinide chemistry, with emphasis on preparative chemistry and microcalorimetry.  From 1986 to 1997 he served as head of the chemistry division and later as deputy director of the European Institute for Transuranium Elements, Karlsruhe, Germany.  His research interests are centered on the structural and thermodynamic properties of the lanthanides and actinides and their compounds, as well as the solution chemistry of these elements.  He published about 125 papers, and 20 monographs and book chapters on these topics.

From the reviews of the third edition:

"This book is intended to provide a comprehensive and uniform treatment of the chemistry of the actinide elements … . Collectively, the set provides a balanced and insightful treatment of the current, cutting-edge research on these elements and related topics. … In my opinion, the editors have eminently succeeded in attaining their goals, I am pleased to recommend heartily this latest edition of a classic monograph … . This … should remain the definitive work on the subject for many years to come." (George B. Kauffman, Chemical Educator, Vol. 11 (5), 2006)