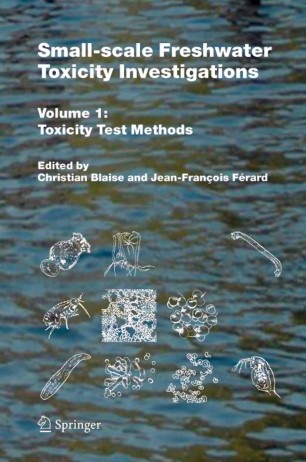 Developed, developing and emerging economies worldwide are collectively contributing multiple stresses on aquatic ecosystems by the release of numerous contaminants. This in turn demands that basic toxicological information on their potential to harm living species be available. Hence, environmental protection programs aimed at preserving water quality must have access to comprehensive toxicity screening tools and strategies that can be applied reliably and universally. While a good number of toxicity testing procedures and hazard assessment approaches have been published in the scientific literature over the past decades, many are wanting in that insufficient detail is available for users to be able to fully understand the test method or scheme and to be able to reproduce it successfully. Even standardized techniques published in recognized international standard organization documents are often lacking in thoroughness and minutiae. Paucity of information relating to biological test methods may be consequent and trigger several phenomena including generation of invalid data and resulting toxicity measurements, erroneous interpretation and decision-taking with regards to a particular chemical or environmental issue, or simply abandonment of testing procedures. Clearly, improperly documented toxicity testing methods can be detrimental to their promotion and use, as they open the doorway to unnecessary debate and criticism as to their raison d’être. Furthermore, this situation can indirectly contribute to delaying, minimizing or eliminating their application, thereby curtailing the important role toxicity testing plays in the overall protection and conservation of aquatic ecosystems.