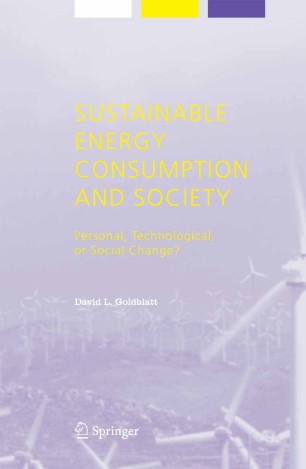 Origin of this book In 1998 the Swiss Federal Institute of Technology (ETH) initiated the 2000 Watt Society, a University-wide research program meant to help Switzerland realize a dramatic reduction in its future energy use. A project within the initiative “Sustainability in the ETH domain,” the 2000 Watt per capita Society sought to promote “the gradual introduction of a way of living and working that requires only one-third of current energy consumption but 1 2 still delivers an improved quality of life. ” Two thousand watts is roughly the current world average per capita energy consumption; it was the average level in Switzerland in the 1950s; it is some three times less than current 3 Swiss usage; and reducing to that level again (in concert with other industrialized nations) would greatly facilitate stabilization of atmospheric carbon dioxide (CO )levels in the long-term, given projections about world 2 population growth and exploitable energy resources [Imboden 1999]. 1 http://www. novatlantis. ch/frames_e. html. 2 A watt is a power term equivalent to 1 joule/second. Non-engineers generally prefer to think of 2000 watts per capita in terms of energy use per unit time such as joules/second or kilowatt-hours/hour. For Switzerland, 2000 watts per capita is equivalent to a primary annual energy consumption of about 65 gigajoules (65 billion joules) per capita. Although less generally communicative, the 2000 watt name is clean and trim, and since it has stuck we will use it throughout the book.