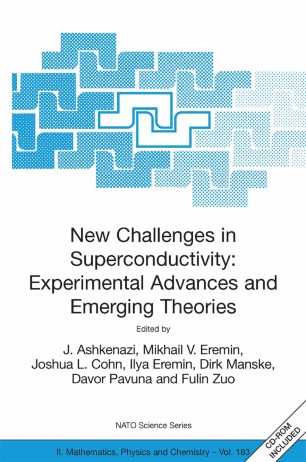 This volume contains the proceedings of the 2004 University of Miami Workshop on Unconventional Superconductivity. The workshop was the fourth in a series of successful meetings on High-T Superconductivity and C related topics, which took place at the James L. Knight Physics Building on the University of Miami campus in Coral Gables, Florida, in January 1991, 1995, 1999, and 2004. The workshop consisted of two consecutive events: 1. NATO Advanced Research Workshop (ARW) on New Challenges in Superconductivity: Experimental Advances and Emerging Theories, held on January 11-14, 2004; 2. Symposium on Emerging Mechanisms for High Temperature Superconductivity (SEMHTS), held on January 15-16, 2004. It is hard to write a balanced preface to a volume like this one, yet at least we try to offer the reader a taste of what was happening in this workshop. There were close to a hundred scientists from around the world, albeit fewer Russians than we had originally hoped for. Nevertheless, the workshop was very lively and we trust that this is demonstrated in this volume. The workshop included high-quality presentations on state of the art works, yet a key issue, discussed by many, was how homogeneous the cuprates are. STM data, as well as other reports, showed that the cuprate superconductors (SC’s) studied were inhomogeneous, especially in the underdoped regime; while experiments, like ARPES and magnetoresistance have established the existence of a Fermi Surface (FS), at least above some doping level, in the cuprates.