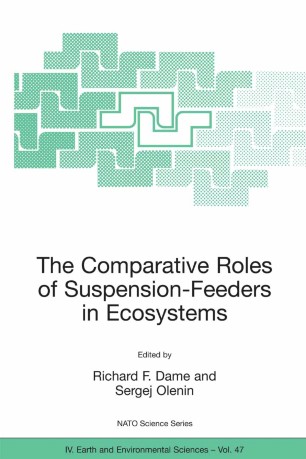 The Comparative Roles of Suspension-Feeders in Ecosystems

Proceedings of the NATO Advanced Research Workshop on The Comparative Roles of Suspension-Feeders in Ecosystems Nida, Lithuania 4–9 October 2003

Animals are a major link between the water column (pelagic) and the bottom (benthic) habitats in most shallow systems. This coupling is dominated by active processes such as suspension-feeding in which the organism actively uses energy to pump water that is then filtered to remove suspended particles that are consumed while undigested remains are deposited on the bottom. As a result of this feeding on and metabolism of particles, the animals excrete dissolved inorganic and organic waste back into the water column, and thus, become major components in the cycling and feedback of essential elements. With relatively high weight specific filtration rates of 1— 10 liters/hour/gram dry tissue and a propensity to form large aggregated populations (beds, reefs, schools and swarms), these organisms can play an important role in regulating water column processes

Although estuarine bivalve molluscs such as oysters and mussels dominate the suspension-feeder literature, other groups including plankton and nekton that are found in estuarine as well as other aquatic systems are also potentially important removers of suspended particles. Thus, a significant part of the NATO Advanced Research Workshop focused on suspension-feeders as controllers of plankton abundance, biomass and diversity, system metabolism, nutrient cycling and scale dependency.

Systems dominated by suspension-feeders are typically impacted by human activities including recreation, aquaculture, human and industrial pollution, and bilge water from shipping. Suspension-feeders are often impacted by fisheries and over-exploitation. These impacts commonly result in changes in ecosystem structure either through the food chain concentration of harmful substances or diseases, the introduction of alien species of suspension-feeders, or the instability of suspension-feeders systems through species displacement or phase shifts in the dominance between different suspension-feeding components such as nekton or zooplankton. These issues were addressed near the close of the workshop along with conclusions and syntheses developed by the working groups.