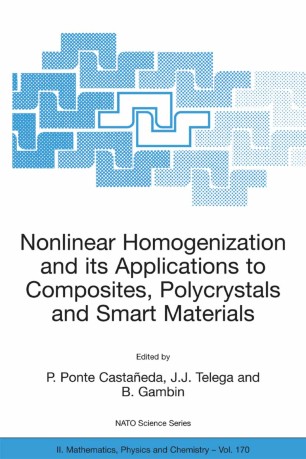 Nonlinear Homogenization and its Applications to Composites, Polycrystals and Smart Materials

Although several books and conference proceedings have already appeared dealing with either the mathematical aspects or applications of homogenization theory, there seems to be no comprehensive volume dealing with both aspects. The present volume is meant to fill this gap, at least partially, and deals with recent developments in nonlinear homogenization emphasizing applications of current interest. It contains thirteen key lectures presented at the NATO Advanced Workshop on Nonlinear Homogenization and Its Applications to Composites, Polycrystals and Smart Materials. The list of thirty one contributed papers is also appended.

The key lectures cover both fundamental, mathematical aspects of homogenization, including nonconvex and stochastic problems, as well as several applications in micromechanics, thin films, smart materials, and structural and topology optimization. One lecture deals with a topic important for nanomaterials: the passage from discrete to continuum problems by using nonlinear homogenization methods. Some papers reveal the role of parameterized or Young measures in description of microstructures and in optimal design. Other papers deal with recently developed methods – both analytical and computational – for estimating the effective behavior and field fluctuations in composites and polycrystals with nonlinear constitutive behavior.

All in all, the volume offers a cross-section of current activity in nonlinear homogenization including a broad range of physical and engineering applications. The careful reader will be able to identify challenging open problems in this still evolving field. For instance, there is the need to improve bounding techniques for nonconvex problems, as well as for solving geometrically nonlinear optimum shape-design problems, using relaxation and homogenization methods.