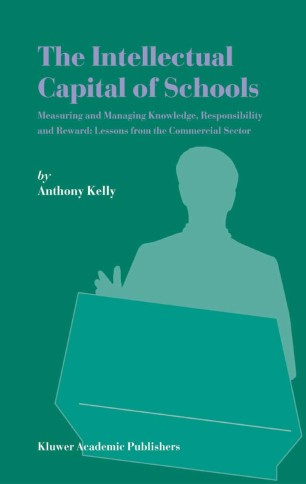 The Intellectual Capital of Schools

Measuring and Managing Knowledge, Responsibility and Reward: Lessons from the Commercial Sector

A teacher may get good, even astounding, results from his pupils while he is teaching them and yet not be a good teacher; because it may be that, while his pupils are directly under his influence, he raises them to a height which is not natural to them, without fostering their own capacities for work at this level, so that they immediately decline again as soon as the teacher leaves the classroom. Ludwig Wittgenstein, 1889 – 1951. It is difficult to measure effectiveness in not-for-profit organisations like schools, colleges and universities. There is no ‘bottom-line’ against which to gauge performance, they have limited technical development and managers struggle to make meaningful comparisons between outcomes and targets. In education, well-publicised attempts have been made to establish - some would say impose - a set of criteria by which organisations judge success or failure. These have been largely subjective - the percentage of inspected classes regarded as good, the extent to which staff is involved in decision making, the appropriateness of the leadership shown by senior managers, and so on – if occasionally peppered with quantitative measures, like the percentage of students achieving certain grades in public examinations, to sustain the illusion of objectivity. This is not to fault the aspiration necessarily, though initially at least it created a surveillance culture in schools that did justice to neither the inspected nor the argument for inspection. Happily, this is changing.