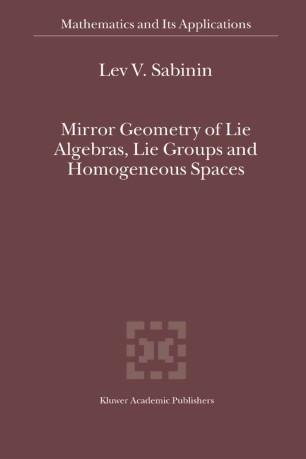 Part of the Mathematics and Its Applications book series (MAIA, volume 573)

As K. Nomizu has justly noted [K. Nomizu, 56], Differential Geometry ever will be initiating newer and newer aspects of the theory of Lie groups. This monograph is devoted to just some such aspects of Lie groups and Lie algebras. New differential geometric problems came into being in connection with so called subsymmetric spaces, subsymmetries, and mirrors introduced in our works dating back to 1957 [L.V. Sabinin, 58a,59a,59b]. In addition, the exploration of mirrors and systems of mirrors is of interest in the case of symmetric spaces. Geometrically, the most rich in content there appeared to be the homogeneous Riemannian spaces with systems of mirrors generated by commuting subsymmetries, in particular, so called tri-symmetric spaces introduced in [L.V. Sabinin, 61b]. As to the concrete geometric problem which needs be solved and which is solved in this monograph, we indicate, for example, the problem of the classification of all tri-symmetric spaces with simple compact groups of motions. Passing from groups and subgroups connected with mirrors and subsymmetries to the corresponding Lie algebras and subalgebras leads to an important new concept of the involutive sum of Lie algebras [L.V. Sabinin, 65]. This concept is directly concerned with unitary symmetry of elementary par- cles (see [L.V. Sabinin, 95,85] and Appendix 1). The first examples of involutive (even iso-involutive) sums appeared in the - ploration of homogeneous Riemannian spaces with and axial symmetry. The consideration of spaces with mirrors [L.V. Sabinin, 59b] again led to iso-involutive sums.