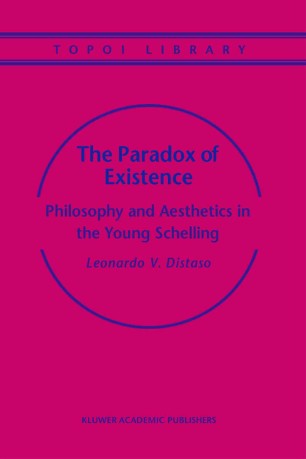 The Paradox of Existence

Philosophy and Aesthetics in the Young Schelling

This book is not a merely historical reconstruction of Schelling’s thought; its main goal is to provide a contribution for a better comprehension of the importance of the philosophical quest of the young German philosopher from within, which represents a turning point for the whole thought of modernity. I did not describe the various fields of Schelling’s work, but I pointed out the central position of his Aesthetics, through the analysis of the inner mechanisms of his concepts. This mechanism, in my opinion, shows the reason why an Aesthetic philosophy is possible, and why its origin can be traced to Kant’s Aesthetics (particularly in Kant’s Critique of Judgement) and in the speculations of the early post-Kantian philosophy. The young Schelling’s philosophical problems precede his encounter with Fichte’s philosophy. Schelling discovers these problems, related to Plato, Aristotle, Spinoza, Wolff, Leibniz and Kant, in the protestant college of the Stift in Tübingen. Fichte confirmed the necessity of an urgent reform of transcendental philosophy, and offered to the young philosopher a philosophical dictionary and an orientation. Schelling exploited these resources with a great degree of autonomy, independence and originality. In these years Hölderlin’s influence on Schelling was much greater. Schelling’s and Hölderlin’s speculations, in these crucial years, were tightly connected.