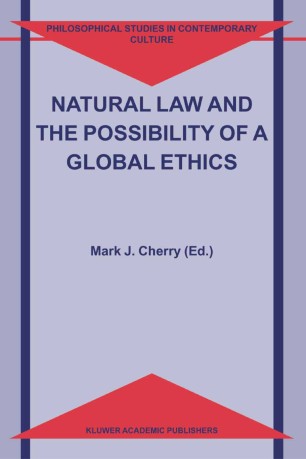 Natural Law and the Possibility of a Global Ethics

Accounts of natural law moral philosophy and theology sought principles and precepts for morality, law, and other forms of social authority, whose prescriptive force was not dependent for validity on human decision, social influence, past tradition, or cultural convention, but through natural reason itself.

This volume critically explores and assesses our contemporary culture wars in terms of: the possibility of natural law moral philosophy and theology to provide a unique, content-full, canonical morality; the character and nature of moral pluralism; the limits of justifiable national and international policy seeking to produce and preserve human happiness, social justice, and the common good; the ways in which morality, moral epistemology, and social political reform must be set within the broader context of an appropriately philosophically and theologically anchored anthropology. This work will be of interest to philosophers, theologians, bioethicists, ethicists and political scientists.