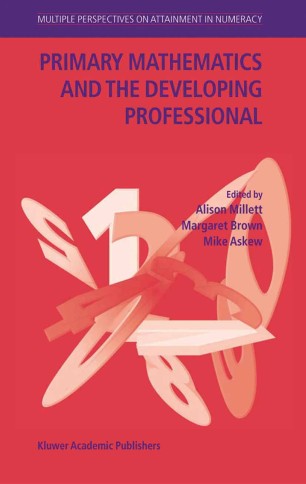 Primary Mathematics and the Developing Professional

Abstract. This introduction sets the scene for the remainder of the book by considering first the international context of widespread concern about the improvement of numeracy skills. This is related to reform movements in the United Kingdom, the United States and other countries aimed at modernising primary (elementary) school mathematics curricula. A detailed account is given of the National Numeracy Strategy in England, a systemic government-imposed response to concern about standards implemented in 1999/2000. This includes a discussion of the alternative meanings of numeracy. An earlier initiative sponsored by a United Kingdom charitable trust reacting to concern about primary numeracy was the Leverhulme Numeracy Research Programme. This large-scale longitudinal study and linked set of case-study projects, focusing on reasons for low attainment, took place during 1997-2002. This book, and each other in the same series, is based on results of that research. The timescale fortuitously enabled the research team to also report on some effects of the systemic reform in the National Numeracy Strategy. 1. THE INTERNATIONAL CONTEXT In many countries, there are recurring periods of national concern about the low standards of calculation skills shown by children in primary (elementary) schools. Recently, these concerns have become more urgent and more political with the publication of international comparisons of mathematical achievement, first at secondary and more recently at primary level (e. g. Lapointe, Mead, & Askew 1992; Mullis et al. , 1997).