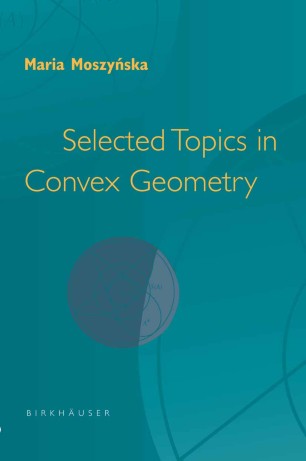 The field of convex geometry has become a fertile subject of mathematical activity in the past few decades. This exposition, examining in detail those topics in convex geometry that are concerned with Euclidean space, is enriched by numerous examples, illustrations, and exercises, with a good bibliography and index.

The theory of intrinsic volumes for convex bodies, along with the Hadwiger characterization theorems, whose proofs are based on beautiful geometric ideas such as the rounding theorems and the Steiner formula, are treated in Part 1. In Part 2 the reader is given a survey on curvature and surface area measures and extensions of the class of convex bodies. Part 3 is devoted to the important class of star bodies and selectors for convex and star bodies, including a presentation of two famous problems of geometric tomography: the Shephard problem and the Busemann–Petty problem.

Selected Topics in Convex Geometry requires of the reader only a basic knowledge of geometry, linear algebra, analysis, topology, and measure theory. The book can be used in the classroom setting for graduates courses or seminars in convex geometry, geometric and convex combinatorics, and convex analysis and optimization. Researchers in pure and applied areas will also benefit from the book.

"This book is the translation and revision of the original Polish 2001 edition. Its focus is on studying convexity for its own sake rather than on applications of convexity … . The readable book contains numerous examples and some exercises. … the book could be used by students for courses or seminars in several geometric fields." (E. Hertel, Mathematical Reviews, Issue 2006 g)