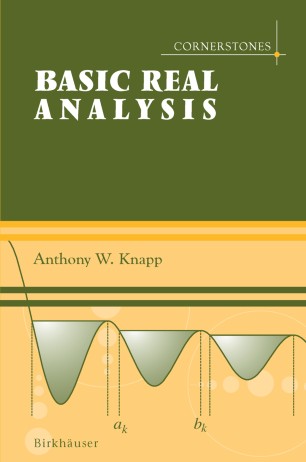 Along with a companion volume Advanced Real Analysis

Basic Real Analysis and Advanced Real Analysis (available separately or together as a Set) systematically develop those concepts and tools in real analysis that are vital to every mathematician, whether pure or applied, aspiring or established. These works present a comprehensive treatment with a global view of the subject, emphasizing the connections between real analysis and other branches of mathematics.

* Early chapters treat the fundamentals of real variables, sequences and series of functions, the theory of Fourier series for the Riemann integral, metric spaces, and the theoretical underpinnings of multivariable calculus and differential equations

* Subsequent chapters develop the Lebesgue theory in Euclidean and abstract spaces, Fourier series and the Fourier transform for the Lebesgue integral, point-set topology, measure theory in locally compact Hausdorff spaces, and the basics of Hilbert and Banach spaces

* The development proceeds from the particular to the general, often introducing examples well before a theory that incorporates them

* The text includes many examples and hundreds of problems, and a separate 55-page section gives hints or complete solutions for most of the problems

Basic Real Analysis requires of the reader only familiarity with some linear algebra and real variable theory, the very beginning of group theory, and an acquaintance with proofs. It is suitable as a text in an advanced undergraduate course in real variable theory and in most basic graduate courses in Lebesgue integration and related topics. Because it focuses on what every young mathematician needs to know about real analysis, the book is ideal both as a course text and for self-study, especially for graduate students preparing for qualifying examinations. Its scope and approach will appeal to instructors and professors in nearly all areas of pure mathematics, as well as applied mathematicians working in analytic areas such as statistics, mathematical physics, and differential equations. Indeed, the clarity and breadth of Basic Real Analysis make it a welcome addition to the personal library of every mathematician.