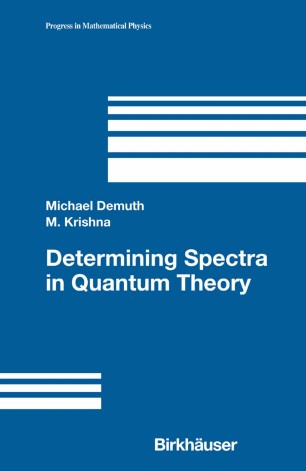 Themainobjectiveofthisbookistogiveacollectionofcriteriaavailablein the spectral theory of selfadjoint operators, and to identify the spectrum and its components in the Lebesgue decomposition. Many of these criteria were published in several articles in di?erent journals. We collected them, added some and gave some overview that can serve as a platform for further research activities. Spectral theory of Schr¨ odinger type operators has a long history; however the most widely used methods were limited in number. For any selfadjoint operatorA on a separable Hilbert space the spectrum is identi?ed by looking atthetotalspectralmeasureassociatedwithit;oftenstudyingsuchameasure meant looking at some transform of the measure. The transforms were of the form f,?(A)f which is expressible, by the spectral theorem, as ?(x)dµ (x) for some ?nite measureµ . The two most widely used functions? were the sx ?1 exponential function?(x)=e and the inverse function?(x)=(x?z) . These functions are “usable” in the sense that they can be manipulated with respect to addition of operators, which is what one considers most often in the spectral theory of Schr¨ odinger type operators. Starting with this basic structure we look at the transforms of measures from which we can recover the measures and their components in Chapter 1. In Chapter 2 we repeat the standard spectral theory of selfadjoint op- ators. The spectral theorem is given also in the Hahn–Hellinger form. Both Chapter 1 and Chapter 2 also serve to introduce a series of de?nitions and notations, as they prepare the background which is necessary for the criteria in Chapter 3.