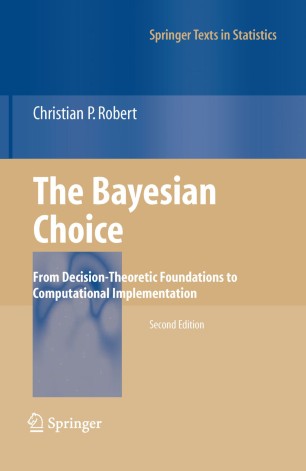 From Decision-Theoretic Foundations to Computational Implementation

Winner of the 2004 DeGroot Prize

This paperback edition, a reprint of the 2001 edition, is a graduate-level textbook that introduces Bayesian statistics and decision theory. It covers both the basic ideas of statistical theory, and also some of the more modern and advanced topics of Bayesian statistics such as complete class theorems, the Stein effect, Bayesian model choice, hierarchical and empirical Bayes modeling, Monte Carlo integration including Gibbs sampling, and other MCMC techniques. It was awarded the 2004 DeGroot Prize by the International Society for Bayesian Analysis (ISBA) for setting "a new standard for modern textbooks dealing with Bayesian methods, especially those using MCMC techniques, and that it is a worthy successor to DeGroot's and Berger's earlier texts".

Christian P. Robert is Professor of Statistics in the Applied Mathematics

Department at the Université Paris Dauphine, and Head of the Statistics Laboratory at the Center for Research in Economics and Statistics (CREST) of the National Institute for Statistics and Economic Studies (INSEE) in Paris. In addition to many papers on Bayesian statistics, simulation methods, and decision theory, he has written four other books, including Monte Carlo Statistical Method (Springer 2004) with George Casella and Bayesian Core (Springer 2007) with Jean-Michel Marin. He has served or is serving as associate editor for the Annals of Statistics, Bayesian Analysis, the Journal of the American Statistical Association, Statistical Science, and Sankhya. and is editor of the Journal of the Royal Statistical Society (Series B) from 2006–2009. He is a fellow of the Institute of Mathematical Statistics, and received the 1995 Young Statistician Award of the Société de Statistique de Paris.

Review of the second edition:

"The text reads fluently and beautifully throughout, with light, good-humoured touches that warm the reader without being intrusive. There are many examples and exercises, some of which draw out the essence of work of other authors. Only a few displays and equations have numbers attached. This is an extremely fine, exceptional text of the highest quality." (ISI Short Book Reviews)