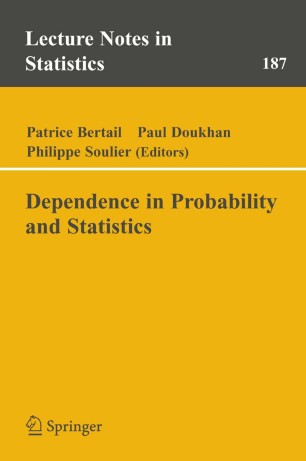 Dependence in Probability and Statistics

This book gives a detailed account of some recent developments in the field of probability and statistics for dependent data. The book covers a wide range of topics from Markov chain theory and weak dependence with an emphasis on some recent developments on dynamical systems, to strong dependence in times series and random fields. A special section is devoted to statistical estimation problems and specific applications. The book is written as a succession of papers by some specialists of the field, alternating general surveys, mostly at a level accessible to graduate students in probability and statistics, and more general research papers mainly suitable to researchers in the field.

The first part of the book considers some recent developments on weak dependent time series, including some new results for Markov chains as well as some developments on new notions of weak dependence. This part also intends to fill a gap between the probability and statistical literature and the dynamical system literature. The second part presents some new results on strong dependence with a special emphasis on non-linear processes and random fields currently encountered in applications. Finally, in the last part, some general estimation problems are investigated, ranging from rate of convergence of maximum likelihood estimators to efficient estimation in parametric or non-parametric time series models, with an emphasis on applications with non-stationary data.