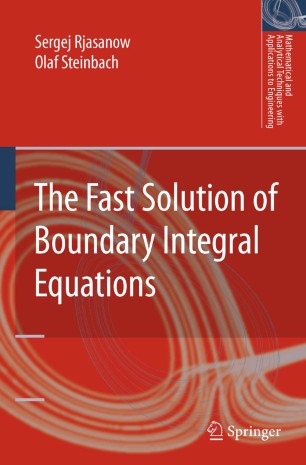 The use of surface potentials to describe solutions of partial differential equations goes back to the middle of the 19th century. Numerical approximation procedures, known today as Boundary Element Methods (BEM), have been developed in the physics and engineering community since the 1950s. These methods turn out to be powerful tools for numerical studies of various physical phenomena which can be described mathematically by partial differential equations.

The Fast Solution of Boundary Integral Equations provides a detailed description of fast boundary element methods which are based on rigorous mathematical analysis. In particular, a symmetric formulation of boundary integral equations is used, Galerkin discretisation is discussed, and the necessary related stability and error estimates are derived. For the practical use of boundary integral methods, efficient algorithms together with their implementation are needed. The authors therefore describe the Adaptive Cross Approximation Algorithm, starting from the basic ideas and proceeding to their practical realization. Numerous examples representing standard problems are given which underline both theoretical results and the practical relevance of boundary element methods in typical computations.

The most prominent example is the potential equation (Laplace equation), which is used to model physical phenomena in electromagnetism, gravitation theory, and in perfect fluids. A further application leading to the Laplace equation is the model of steady state heat flow. One of the most popular applications of the BEM is the system of linear elastostatics, which can be considered in both bounded and unbounded domains. A simple model for a fluid flow, the Stokes system, can also be solved by the use of the BEM. The most important examples for the Helmholtz equation are the acoustic scattering and the sound radiation.