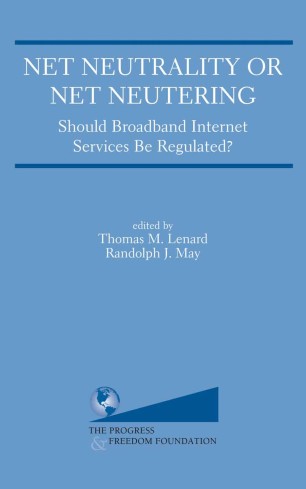 The subject of this book – whether or not to extend traditional telecommunications regulation to high-speed or "broadband" access to the Internet – is perhaps the most important issue now facing the Federal Communications Commission. The issue is also very contentious, with influential economic interests as well as academics on both sides of the question. Content providers – Microsoft and Amazon, for instance – argue that broadband providers should be treated as common carriers, required to transmit all content in a nondiscriminatory way. The broadband providers – the telephone and cable companies – argue that no bottleneck monopoly exists to justify such regulation and that, if imposed, it would stifle development of the Internet.

This volume consists of recently updated papers that were originally presented at a June 2003 conference held by the Progress and Freedom Foundation. The authors are among the top researchers in the field of telecommunications research.

Thomas M. Lenard is Vice President for Research and Senior Fellow at the Progress & Freedom Foundation. He is the author or coauthor of numerous books and articles on electricity, antitrust, privacy, and other regulatory issues. Lenard received his B.A. from the University of Wisconsin and his Ph.D. from Brown University.

Randolph J. May is Senior Fellow and Director of Communications Policy Studies at the Progress & Freedom Foundation. In addition to writing a regular column for Legal Times, he has published more than fifty articles and essays on a wide variety of topics ranging from communications to law to constitutional theory. May received his A.B. from Duke University and his J.D. from Duke Law School.