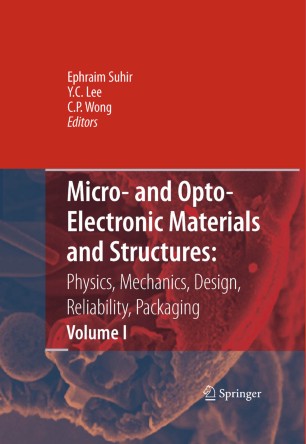 Micro- and Opto-Electronic Materials and Structures: Physics, Mechanics, Design, Reliability, Packaging is the first comprehensive reference to collect and present the most, up-to-date, in-depth, practical and easy-to-use information on the physics, mechanics, reliability and packaging of micro- and opto-electronic materials, assemblies, structures and systems. The chapters in these two volumes contain summaries of the state-of-the-art and present new information on recently developed important methods or devices.   Furthermore,  practical recommendations are offered on how to successfully apply current knowledge and recently developed technology to design, manufacture and operate viable, reliable and cost-effective electronic components or photonic devices.  The emphasis is on the science and engineering of electronic and photonic packaging, on physical design problems, challenges and solutions.

Volume I focuses on physics and mechanics of micro- and opto-electronic structures and systems, i.e., on the science underpinnings of engineering methods and approaches used in microelectronics and photonics. Volume II deals with various practical aspects of reliability and packaging of micro- and opto-electronic systems. Internationally recognized experts and world leaders in particular areas of this branch of applied science and engineering contributed to the book.

Topics addressed in the book include, but are not limited to, the following:

physics and mechanics of polymer materials;

thermal phenomena in micro- and opto-electronic systems and thermal stresses;

testing methods and techniques, subjected to thermal loading, stress analyses of processed silicon wafers, and many others.

The book is intended  as a reference source and as a manual for electrical, materials, mechanical, and reliability engineers, as well as applied physicists and materials scientists. The book will be an essential tool for all those who are involved or interested in state-of-the-art in the analysis, design and manufacturing of micro- and opto-electronic systems.

Prof. C. P. Wong is a Regents’ Professor and the Charles Smithgall Institute Endowed Chair at the School of Materials Science and Engineering at Georgia Institute of technology. After his doctoral study, he was awarded a two-year postdoctoral fellowship with Nobel Laureate Professor Henry Taube at Stanford University.  He joined AT&T Bell Laboratories in 1977 as a member of the technical staff and in 1992, he was elected as an AT&T Bell Laboratories Fellow for his fundamental contributions to low-cost high performance plastic packaging of semiconductors. Since 1996, he is a Professor at the School of Materials Science and Engineering at the Georgia Institute of Technology. He has received many awards, among those, the AT&T Bell Labs Fellow Award in 1992, the IEEE CPMT Society Outstanding and Best Paper Awards in 1990, 1991, 1994, 1996, 1998, 2002, the IEEE CPMT Society Outstanding Sustained Technical Contributions Award in 1995, the IEEE Third Millennium Medal in 2000, the IEEE EAB Education Award in 2001, the IEEE CPMT Society Exceptional Technical Contributions Award in 2002 and the IEEE Components, Packaging and Manufacturing Technology Field Award in 2006.  Dr. Wong is a Fellow of the IEEE, AIC, and AT&T Bell Labs, and was the technical vice president (1990 &1991), and the president of the IEEE-CPMT Society (1992 &1993). He was elected a member of the National Academy of Engineering in 2000.

Professor Y. C. Lee is a Professor of Mechanical Engineering. He was the Chair of ASME Electronic and Photonic Packaging Division (EPPD) from 2004 to 2005. From 1993 to 2002, he was an Associate Director of the Center for Advanced Manufacturing and Packaging of Microwave, Optical and Digital Electronics, University of Colorado at Boulder. Prior to joining the University in 1989, he was a Member of Technical Staff at AT&T Bell Laboratories, Murray Hill, New Jersey.  Dr. Lee was an Associated Editor of ASME Journal of Electronic Packaging from 2001 to 2004 and a Guest Editor for IEEE Transaction on Advanced Packaging in 2003 and 2005. He has received several awards: ASME Fellow, December 2002, Presidential Young Investigator (National Science Foundation, 1990), Outstanding Young Manufacturing Engineer Award (SME, 1992), Outstanding Paper Award (IEEE-ECTC, 1991), Outstanding Paper Award (ASME J. of Electronic Packaging, 1993), IEEE Transactions on Advanced Packaging Honorable Mention Paper Award, 2003

"The book contains 25 chapters written by experts, mainly drawn from the United States and Europe. The chapters contain good technical details and thorough reference lists, and most of the figures are high quality. … For those engaged in developing MOEMS products and similar activities, the acquisition of this book … will be a sound investment." (K. Alan Shore, Optics and Photonics News, November, 2007)