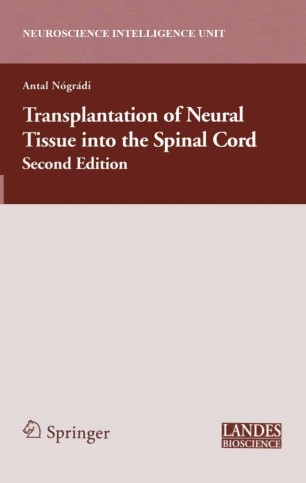 Transplantation of Neural Tissue into the Spinal Cord

The book gives an account of results obtained from experiments where grafts of neuronal, glial and other tissues as well as artificial materials were placed into the spinal cord. It attempts to evaluate the contributions made by these studies to our understanding of basic neurobiologies questions. These include factors that regulate neuronal growth during development as well as regenera­ tion following injury to the nervous system. The model of neural transplanta­ tion is also useful for the study of cell-to-cell interactions, and this applies to interactions between glial cells and neurones, between various populations of neuronal cells and finally between axons and skeletal muscle fibres. The mecha­ nisms involved in the establishment of specific synaptic connections between neurones can also be investigated in this experimental paradigm. Important in­ formation regarding this issue was also obtained on systems other than the spinal cord, i. e. the cerebellum, hippocampus and striatum. Although such in­ formation of precise connections between the host and the grafted embryonic tissue is still lacking in the spinal cord, there is much information on the re­ sponse of the host nervous system to the grafted embryonic tissue, and that of the graft to its new host environment. It appears that embryonic grafts are able to induce repair processes follow­ ing injury to the nervous system.