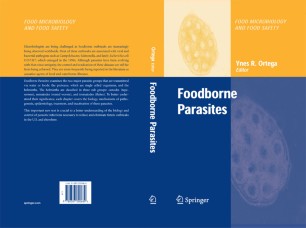 Microbiologists are being challenged as foodborne outbreaks are increasingly being observed worldwide. Most of these outbreaks are associated with viral and bacterial pathogens such as Campylobacter, Salmonella, and lately Escherichia coli O157:H7, which emerged in the 1990s. Although parasites have been evolving with Man since antiquity, the control and eradication of these diseases are still far from being achieved. They are more frequently being reported in the literature as causative agents of food and waterborne illnesses.

Foodborne Parasites examines the two major parasite groups that are transmitted via water or foods: the protozoa, which are single celled organisms, and the helminths. The helminths are classified in three sub groups: cestodes (tapeworms), nematodes (round worms), and trematodes (flukes). To better understand their significance, each chapter covers the biology, mechanisms of pathogenesis, epidemiology, treatment, and inactivation of these parasites.

This important new text is crucial to a better understanding of the biology and control of parasitic infections necessary to reduce and eliminate future outbreaks in the U.S. and elsewhere.