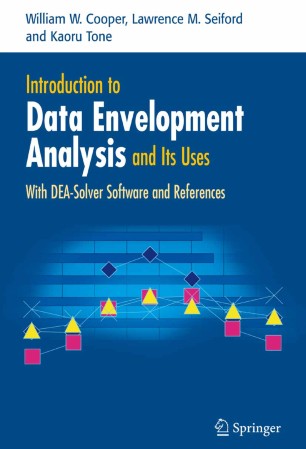 Introduction to Data Envelopment Analysis and Its Uses

With DEA-Solver Software and References

Recent years have seen a great variety of applications of DEA (Data Envelopment Analysis) for use in evaluating the performances of many different kinds of entities engaged in many different activities in many different contexts in many different countries. One reason is that DEA has opened up possibilities for use in cases which have been resistant to other approaches because of the complex (often unknown) nature of the relations between multiple inputs and multiple outputs involved in many of these activities (which are often reported in non-commeasurable units). Examples include the maintenance activities of U.S. Air Force bases in different geographically locations, or police forces in England and Wales as well as performances of branch banks in Cyprus and Canada and the efficiency of universities in performing their education and research functions in the U.S., England, and France. These kinds of applications extend to evaluating the performance of cities, regions and countries with many different kinds of inputs and outputs that include "social" and "safety-net" expenditures as inputs and various "quality-of-life" dimensions as outputs which, in turn, have led to dealing with important issues such as identifying sites for new locations (away from Tokyo) for the capital of Japan.

Introduction to Data Envelopment Analysis and Its Uses: With DEA-Solver Software and References has been carefully designed by the authors to provide a systematic introduction to DEA and its uses as a multifaceted tool for evaluating problems in a variety of contexts. The authors have been involved in DEA's development from the beginning. William Cooper (with Abraham Charnes and Edwardo Rhodes) is a founder of DEA. Lawrence Seiford and Kaoru Tone have been actively involved as researchers and practitioners from its earliest beginnings. All have been deeply involved in uses of DEA in practical applications as well as in the development of its basic theory and methodologies. The result is a textbook grounded in authority, experience and substance.